How To Know If A Guy Likes You

Half the fun of having a crush is dissecting every single tiny thing, the object of your affection does. There are a few reasons a guy would hesitate to make a move. It could be that he can’t tell if you like him and he doesn’t want to put himself out there until he has some evidence that he won’t be rejected. Some guys are just naturally shyer and need more time than others to get the ball rolling. Additionally, it could be that he’s not in the right headspace for a relationship. Here are tips on how to know if a guy likes you.

However, some other time, when a guy likes you, he makes it clear and obvious. That’s why it can be so perplexing when you think a guy likes you, but you’re not 100% sure. You don’t want to waste time pining after someone who’s not interested, but it really seems like he’s interested, so you can’t let it go either.

In an effort to extrapolate these mixed signals, this article will clear up your space of cloudy confusion. Here are some intriguing tips on how to know if a guy likes you. 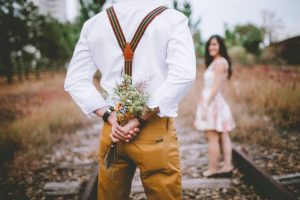 Read Also: How to Attract The Right Man To Your Life

How to Know If a Guy Likes You

1. To know a guy likes you, he’s always around

To know a guy likes you, he will always be nearby like a moth is, to a flame, if you find he still just seems to be so close, that’s a substantial sign that he likes you.

He may opt for places where it would be easy to deny he’s there for you, such as a mutual friend’s party. But if he’s into you, he’ll always manage to gravitate to your corner of the room.

Less subtle signs include him suddenly frequenting places you regularly hit – like your gym or favourite sushi place. This is even more transparent than him managing to always be around you at social gatherings.

2. A guy likes you when he always texts you back

If a guy isn’t interested in you, he’s not going to bother putting time and effort into regular texting. Sure, some guys will answer for a while out of politeness, but if he’s always responding to your texts on time, that’s a heavy hint.

He also attempts to keep the conversation going, rather than letting it fizzle out.

3. A guy likes you when he’s nervous around you

Our bodies often betray us when we are trying our best to appear calm and confident. Just like you often find your cheeks flushing and your mouth going dry when nervous, you’ll notice the same signs in him.

Instead of making eye contact with you, he’ll probably suddenly be fascinated by the string on his hoodie, and seem to forget how to use his hands totally. Now if he’s a nervous guy in general, this doesn’t mean much, but he might get extra nervous around you.

4. A guy likes you when he wants to know your relationship status

This will be one of the first things he brings up, and it makes sense. If a guy likes you, he’s going to want to know if you’re available and ripe for the picking.

He might just go ahead and ask you if you’re dating anyone. If he’s afraid you’ll read into his question, he’ll likely dance around the subject instead. He might ask who a guy in one of your social media pictures is, or if you are doing anything exciting on the weekend. If you have any mutual friends, he’ll probably glean your status from them instead of outright asking you.

5. A guy likes you when he wants to know more about you or ask questions about you

There are polite inquiries, and then there are investigative questions. Small talk can include some vague, generic questions, and this doesn’t reveal much about his intentions. But if he’s pressing you with a variety of questions about every part of your life, that means something. He’s got an avid curiosity, and he wants to know it all. When we like someone, we want to know their entire story front to back.

Check out: What’s the Difference Between Loving Someone and Being in Love?

6. He won’t leave you hanging

A guy who cares about you will prioritize you. Date or not, if you have plans, he’ll be there. He will never stand you up. If he really does have to miss it for some reason, he’ll be fiercely apologetic and have an excellent reason for it. When a guy really likes you, all he wants to do is spend time with you, and the last thing in the world he’ll want to do is disappoint you.

7. A guy likes you when he tries to impress you

It’s only natural for a guy to want to impress the girl he loves. He wants you to admire him. By finding ways to slip in highlights and accomplishments about his life, he’s betraying that your opinion really means something to him. Yes, some people will take any opportunity to humblebrag, but if he consistently talks himself up in front of you, take note!

8. A guy likes you when he doesn’t talk to you about other girls

When a man likes you, the last thing he’s going to want to talk about is other girls. If you bring up another girl, even playfully, he’ll be quick to dismiss it and change the subject. It doesn’t matter if he’s trying to hide his feelings for you – he still won’t want to risk you believing he’s unavailable.

9. A guy likes you when he’s helpful

Being friendly is one thing, but when you notice a guy jumping to help you at every opportunity, that means something. Even when he’s trying to act chill, he’ll be the first to offer assistance when you need it. In some cases, he might also come up with ways to make your life easier without you mentioning anything. Appreciate these sweet gestures as a way of him discretely showing he cares about you.

10. A guy likes you when he actually says the words “I miss you.”

Ugggghhh, why is it so hard to admit you miss someone you like? Lol probably because admitting it would mean admitting you’re into them and that’s terrifying. Just like you’re scared actually to say these words, so is he! A guy who really likes you, though, will just say it. Probably because he wants you to know he likes you, which he clearly does.

11. A guy likes you when he jokes about being your boyfriend

Teasingly referring to himself as your boyfriend is a slick way for a guy to get a peek at what your reaction would be. It feels like a safe option because he can hide behind the implication of a joke if it doesn’t go well. Monitor your response to this thoughtfully, because he’ll definitely be searching for you for clues.

So what do you do if you can tell he likes you, but he still hasn’t made a move? For starters, acknowledge that he might never do it. Whether it be out of insecurity or just that he’s not in the right place for a relationship, he may never act on his feelings. If that’s the case, don’t do all the work for him. You deserve to be with someone who will meet you half-way.

Once you are comfortable with the idea that it might not be in the cards, feel free to try sending him a message. If he’s terrified of being rejected, behaving flirtatiously might be enough to spur him into action.

Show your interest without coming on too aggressively. Again, you want him to meet you in the middle here. Smile, laugh at his jokes and offer him undivided attention when he speaks. Show your appreciation for him. Maintain meaningful eye contact for a few seconds longer than what would be normal for friends.

If he likes you and can overcome his fears, he’ll take things to the next level. But if he isn’t able to do that, let it go. Maybe one day he will pluck up the nerve, perhaps not. Either way, you did all you could do and can move on without regret.

With all these, you can still figure out what men want in women. Perhaps, you are the woman, and you want to know if a guy likes you. These are what he wants from you.

What Men Want in Women

Most men “Not All” aren’t always able to share their worries, fears and frustration with others, because of this, they need a woman to open up to, who is kind and understanding enough to be vulnerable with.

Having trust and faith in a man means you think he’s a good person.

Men need respect in general but in particular, when it comes to dating and relationship.

Men need women who are good listeners, some women think they deserve this more than men, but men need this more than women because when they start talking about something personal or private they get into a type of flow.

I believe these are some of the amazing tips on how to  know if a guy likes you. But beware, most guys will show these affections all because they want to get you laid. Don’t rush in making your decisions. Take precautions, don’t allow any guy to play with your heart. You deserve better.