Once upon a time; men were either described as ALPHA MALE or BETA MALE. While Alpha Male shows strong leadership ability, great confidence, and tend to exercise dominion, the Beta male is more of the order takers and subordinate to other people.

But the more we try to study people, the more we learn about the dissimilarities between the Alpha and Beta male personalities.

SIGMA MALES are introverted alpha males without a loud and boisterous personality. They don’t bother themselves with the imaginary hierarchy.

Signal Males love doing their things on the fringe of society. If you like, you can come them the rule breakers and makers.

For Instance, Keanu Reeves was a SIGMA MALE in the lead role he played in the popular movie- John Wick.

John Wick retried after he had a violent career as a legendary assassin. But the sudden death of his wife left him in deep mourning.

Unfortunately, the sadistic Mobster Losef Tarasov and his gangs stole John’s prized car and killed his puppy. And that puppy was a precious gift from his wife. Well! you know what happened after that.

In a nutshell, the SIGMA Male gets a lot of attention for both good and bad things. So, in this video, you will learn a lot of things about this male personality and the signs that you belong to this personality.

Read Also: How to Make a Relationship Work?

WHO IS A SIGMA MALE?

For a start, the sigma male and alpha male have a lot in common. Just that the Sigma Male prefer living his life outside the society’s dominance hierarchy. He doesn’t work with other people. He prefers to walk with the beat of his drum. And they seldom take orders from anybody, except you are putting them to effective and productive use.

Most times, Sigma Males really don’t need much from society. They have their businesses, go for vacation alone, and prioritize adventure and knowledge-seeking over material possessions.

Before the advent of the internet, Sigma Males were the rarest male on earth. But not anymore.

Since the introduction of the internet, they are coming out of their shells and becoming very popular in society.

The Sigma Males play important role in every environment. They are always outside their comfort zone, creative, good with businesses, and make less noise. Of course, they are confident partners and hard workers.

Because Sigma Males are self-sufficient and can live their way, they are very attractive to women.

If you are wondering whether you belong to this personality, here are some unquestionable signs you’re SIGMA MALE;

#1. They Love Being Alone, But Value Other People.

You may not know this. But if you love being alone, yet value other people, it’s a sign that you are a Sigma Male.

Every Sigma Male value their solitude. Even though they can easily attract more people to themselves, they prefer their own company.

Regardless of how close you are to a SIGMA MALE, he’s never comfortable with you around. To him, you are just like an energy-sucking vampire hanging around.

Of course, sigma males value people; they know that achieving their goals in life is not possible without other people. But it’s a bit difficult for them to build relationships. That’s because they enjoy their own company better than that of other people.

Unlike Alpha and Beta Males, the Sigma Males are flexible. They can easily adapt to any situation they find themselves in. A typical Sigma Male can perform understand any circumstance, blend into any environment, and comfortably work outside his comfort zone.

Sigma Males can fit in any role at any time. Funny enough, they don’t need anybody’s validation to be confident of themselves. They are situational leaders who can also be followers if you use them efficiently and productively.

#3. They Are Good Listeners.

Sigma Males are excellent listeners. They don’t talk when every other person is talking. They understand the importance of silence and the respect that comes with it.

So, whenever you are having a conversation with a Sigma Male, he spends most of the time listening to whatever you are saying attentively. They take the content of your message more seriously than its volume.

They know their strengths and flaws. And because of Sigma Male’s level of self-awareness, he can easily correct himself when he goes wrong.

And of course, the Sigma Male never repeats mistakes.

The Sigma Male personality has what I will describe as an ambiguous morality. He doesn’t make hasten generalization on people or situations.

Before a Sigma Male passes a judgment on anyone or a situation, he critically analyzes every aspect of the situation on ground before passing any judgment.

No matter how ugly a situation seems, the Sigma Male would always see the brighter part of it. And that’s because they see good and bad in complex scenarios.

#6. They Have Rusty Social Skills.

In most cases, the Sigma Male social skills are rusty. Most times, they don’t show emotional reactions, that’s what makes them seem abrasive and uninterested.

One thing you can’t take away from a Sigma Male is the fact that he’s always blunt and direct while communicating.

You may think they are rude. But they aren’t, it’s just that they are good listeners. And a Sigma Male will never disguise his intention with flattery or flowery language.

#7. They Decide Their Future.

Like I mentioned earlier, Sigma Males don’t bother themselves with imaginary hierarchy created by society.

They neither need a high-functioning environment to thrive like the Alpha Male nor a passive low-stress environment like the Beta Male.

A Sigma Male creates his path and decides his future. Even if he fails or succeeds, he does it on his terms. And that’s what makes them unique.

They live with the belief that they are responsible for their fates and concern themselves less with the society and environment. That’s why every Sigma Male you see out there holds himself responsible for his actions and consequences.

#8. Most Times They Have a Small But Close Social Circles

Sigma Males are loners who enjoy the company of themselves more than that of other people. They often see other people as energy-sucking vampires.

But they still have small but close social circles that they interact with once in a while. They don’t need a large friend to impress anybody.

All a Sigma Male wants is a few friends who they can trust and see things from their perspective. I know you think this is weird, but it’s not. It’s just the personality of a Sigma Male.

One thing Sigma Males seriously frown at is to rely on other people for the necessities of life.

They earnestly value independence and always strive to be self-sufficient in life. That’s why a Sigma Male would always go outside his comfort zone and work hard to remain independent.

Sigma Males are risk-takers. They always defy the existing social structures and try something different. And they always accept the risks that come with their decisions.

#11. They Can Lead Without Exercising Dominion

The general belief people have is that Alpha Males are the only leaders in the Male personality. But that’s not correct.

Sigma Males are excellent leaders also. But they have their style of leadership. They don’t exert authority or exercise dominion over other people.

Rather, they lead by example and mutual communication. That’s one of the reasons why they are often successful in their leadership roles. And most of their followers are loyal to them.

These are some of the unquestionable signs of a SIGMA MALE.

You can see that Sigma Males are the most unique male on earth. For instance, they are great listeners. But they know how to pass their message eloquently.

They try not to judge you immediately, but because of their critical observation and listening skills, they can be a good judge of character.

While they are great leaders, they don’t crave dominance or authority. In fact, they don’t mind being subordinate if you put them to productive and effective use.

Are Sigma males intimidating?How can you tell a male Sigma?What is a Sigma male personality?What is Sigma personality?
Previous Article 7 Heart-Melting Phrases That Make a Guy Fall for You
Next Article 9 Signs She Never Really Loved You 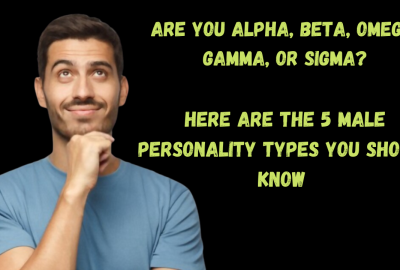 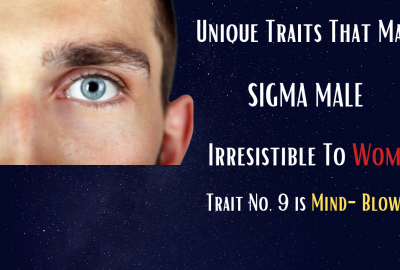